Specialty Optical Systems, Inc. (SOS) founded in May of 1981.

William F. Petty (May 1939-2004) began his career in Los Alamos, NM working with the microbiological effects of radiation in the 1960’s. In the early 1970’s, he decided to work for Zeiss as a microscope salesman where he worked with companies, hospitals, and institutions to accomplish their optical needs. Then in the early 80’s he decided to step out on his own and pursue the dream of owning his own company. With the help of his wife he accomplished this goal.

For over 35 years Mr. Petty pursued the field of optics with a passion to satisfy customer requirements and SOS continues with his passion as a family owned and operated business today. 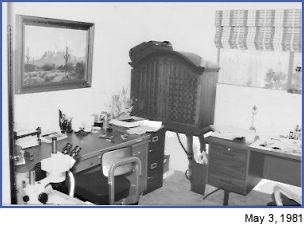 In May of 1981, Specialty Optical Systems original business plan was to distribute microscopes, optical systems and technical lighting to high tech companies throughout the Southwest. The business literally started on a breakfast room table until moving to our own building.

•         February of 1998, SOS launched eSpares.com which at the time was the first web site that specifically targeted semiconductor spare parts for fabs. The site was sold to another company.

•         January of 2003, SOS launched SpecialtyOptical.com as an e-commerce web site to detail our optical product offering and laboratory supplies.

•         In July of 2006, SOS launched SOSCleanroom.com to focus on the cleanroom products used by our traditional semiconductor clientele, medical facilities, educational institutions, pharmaceuticals manufacturers, hospital pharmacies and independent compounding pharmacies. SOS has been distributing to clean rooms since 1990, and is proud to have been designated as the ITW Texwipe Master Distributor for the South West Region of the United States.